Division on Behalf of the Vulnerable

Are We Being Neighbors?

So Much Left to Learn: A sermon for the Burial of Richard “Dick” Huneke

Christian Ethics in the Anglican and Liberative Tradition (2021)

Fear and Resurrection: 'The Fear of the Jews' and its Aftermath

An independent, invited essay. First published online at Public Orthodoxy in a series sponsored by the Orthodox Theological Society in America’s Project on the Holy and Great Council.

The upcoming Great Council, decades in the making, is an opportunity for Orthodoxy to present to the world a vision of the fruitfulness of love ripened through relationships in which we are simultaneously co-workers in one another’s deification and co-workers with God through whom all creation bears life. The Synod is an opportunity for the Orthodox Church to posit a vision of relationships as the very means through which human persons grow in love in the image of God and towards an ever deeper relationship with God. God is love, and it is in love and by love that we come to know God.

Orthodox anthropology unapologetically asserts the goodness of the human person. This notion of goodness, rooted in creation and telos, beginning and end, is made evident and possible through the Incarnation. The Incarnation underlies the possibility of deification, the practice of embodied virtue through which we attain the image and likeness of God. As beings created in the image of God who is ever-in-relation, we too become who we are in relationship. Not just any relations, but relations marked by the fruits of the Spirit: love, joy, peace, patience, kindness, generosity, faithfulness, gentleness, and self-control (Gal 5:22-23). God’s presence is evidenced in the fruit borne by the one who acts (Matt 12:33). We are to be known as Christians by our fruit, especially by the fruit of love (John 33:35). These fruits of the Spirit are given by God, and therefore an indication of God’s presence (1 John 4:16), and require our participation, our appropriation, our co-working with God. As co-workers with God, the mission of the Orthodox Church could be framed as an ongoing effort to recognize the work of God in the world and join that work wherever it is in solidarity and service. This can be done secure in the knowledge that to nourish the fruits of the Spirit wherever they are is to enter into God’s already existing work in creation. Love bears life, and God’s own nature of love overflowing into life is the model for this.

Such a vision recognizes that all relationships are loci for theosis, and provides criteria by which Christians can affirm the many relationships in which human persons engage: Does this relationship nourish, ripen, and harvest the fruits of the Spirit? Does it help its members become better lovers of God and neighbor? Is it life-bearing? Different relationships require different practices to encourage fruitfulness. Monastic relationships are shaped by commitments to a particular community, the sharing of all goods in common, and sexual abstinence. Married relations are shaped by fidelity to a single spouse, as well as by supportive commitments to a wide range of family members including but hardly exclusive to children. These two relationships hardly exhaust the relationships through which God works: we are all members of families, ecclesial communities, and societies, as well as residents of particular regions and countries. We are workers, caretakers, friends, and acquaintances. Each of these relationships can be a place in which love bears life.

Yet such a vision is too risky for “The Sacrament of Marriage and Its Impediments,” as such a vision allows for relationships which stretch the narrow terms by which the document defines marriage, asserting that marriage without sacrament is merely “State-recognized cohabitation” (I.9). A broader vision may be an avenue to recognize the life-bearing fruitfulness of relationships which are a significant target of this document: same-sex marriages. The “free union of man and woman is an indispensable condition for marriage” opens the document. The phrase “man and woman” is repeated seven times. The document decries secular society which threatens Orthodox Christians by its insistence on recognizing “new forms of cohabitation” (I.8) and explicitly rejects all same-sex civil unions (I.10).

So great is this perceived homosexual threat, a threat which in some traditionally Orthodox countries is met with state- and Church-condoned discrimination and violence, that the many relationships in and through which God works are not recognized as deifying: non-procreative relationships entered into by the elderly; the adoption of children by choice rather than need; religiously mixed marriages in which love, joy, hope, and even faith, flourish. The very possibility of allowing that same-sex relationships may be a place in which God works results in a statement that treats as collateral damage all relations that do not conform to its canonical strictures.

As a result, the document elevates the “institution of family” (I.1), later capitalizing ‘Family’ as if it is a platonic form to which all families must correspond. Restricting the legitimate family to only its “traditional” (I.8) boundaries, it fails to account for the varied family formations found in society and Church. Further, this elevation of family signals no awareness that family is often a primary source of violence.

It is notable that the establishment of sacramental marriage between the tenth and twelfth centuries coincides with the emergence of a new paradigm for female sanctity: the battered wife as the saintly ideal. Lest we imagine this is merely a thing of the past, it is worth pointing out the recent resistance to legislation which protects women and children from family violence by the Moscow Patriarchate, which views such legislation as a guise for “an anti-family ideology of radical feminism.” Almost one-third of women experience violence at the hands of an intimate partner, who also commit over 38% of all female homicides. This is a reality of family and marriage which cannot be adequately addressed by pastoral tools which are more focused on purging the church of same-sex relationships than caring for the complex family situations lived out by Orthodox Christians everywhere.

Without a vision which seeks to participate in God’s already-present work in the world, which nurtures the fruits of the Spirit wherever they are found, the Church simply fails to be Church, a loss that God’s world simply cannot afford. 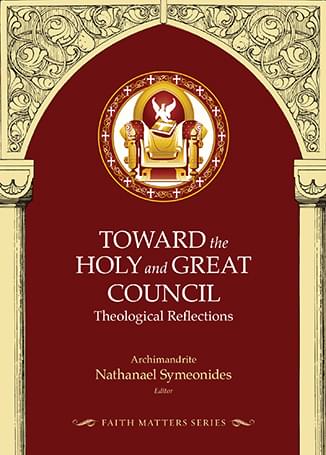